This article pertains to Navigator Server version 5 and later.

Due to varying product lines, your pathname may vary from the one shown below.

For example, it may be c://Navigator/Navigator.

However, inside the folder you will have the same database structure as shown below.

There are several databases underpinning the Navigator Server system.  They exist in pairs for data integrity purposes.

I've encircled the pairs in red and highlighted one pair in yellow for discussion.

The enabled Workflow Actions (the discrete workflow components such as "RIP", "Hotfolder input", "Preflight", etc.)  are kept in "xiflow.actions.xml".  A running backup is kept at "xiflow.actions.backup.xml".  This backup is made periodically throughout the day.

The other databases are for jobs, spot color adjustment libraries, workflows, and output devices.  They also have running backups.

When the system boots it attempts to load the standard databases; i.e. the ones without the word backup in the name.

If this fails for some reason (a crash or a power failure) the server looks for the "backup" version and loads that instead.  If neither of the database pairs exists or if neither can be loaded, the system creates a new, blank database.  You can then recreate your configuration as though it was a new system.  Or.  If you still want to get your system configuration back, all is not lost.  There are other backups too.  (Read on below) 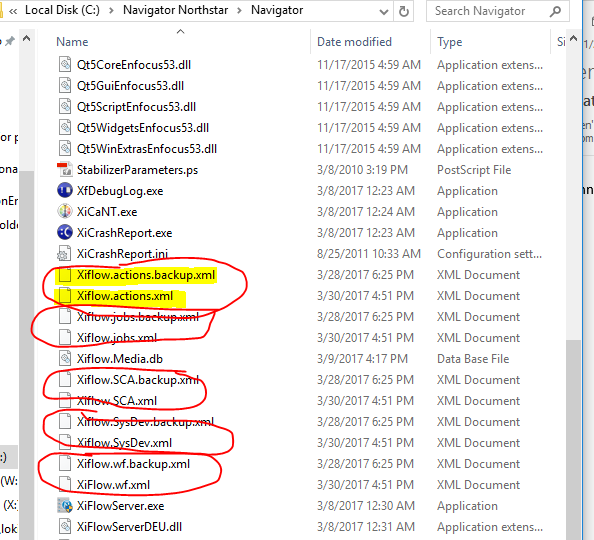 At the same location as the active databases, there is a folder called "ArchivedDBs".  If you are expecting to find archived databases in this folder, then you are a winner! 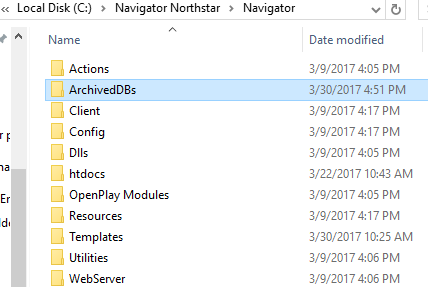 Looking inside you'll find that we make backups occasionally. 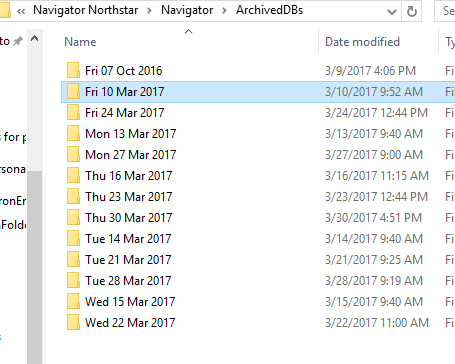 What triggers a backup?  Every time you shut down the Server we write out a copy of each database into a folder named with the date.  If you start up and down 20 times in one day, we don't keep 20 copies of that day.  Just one per day.

How do you move back to one of these backups?

1.  Shut down the Server application.

3. Open this folder in a new window so you can see it and the folder where the databases are kept simultaneously.

5. Start the Navigator Server application.  You will now be using the databases backed up on March 10, 2017.